Giving voice to mourning.
To tune in to the pain of loss, to listen, beyond any barrier (linguistic, cognitive, ideological, religious, political, social).
Share experiences, and learn from them, words that heal and soothe wounds. Respect, respect, and cross the swamp where women, couples, parents who lose their children are forced to swim. For many months, for years, even against their will.

Mourning offers no alternatives. Either we cross it, or we are forced to live there indefinitely.
Among the griefs that are intertwined with motherhood, some are more subtle than others.
Among these, infertility (which we will discuss in this blog in a few weeks), and the termination of pregnancy due to the child’s pathology.
A few days ago, “Nobody knows about us”, a novel by Simona Sparaco for Giunti, was released in Italy.
This novel gives a voice to thousands of couples, gripped by the deaf and renegade mourning of the therapeutic interruption of pregnancy.
Claudia Ravaldi, psychotherapist and psychiatrist, founder and president of CiaoLapo Onlus, interviewed Simona asking her some questions, after having read, listened to, heard, lived every line of the novel. 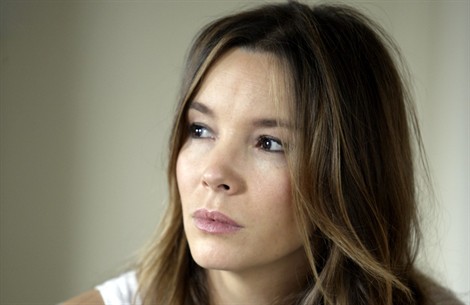 Hi Simona, what was it like to write “Nobody knows about us”? How did the choice of this title come about?

I wrote Nobody knows about us because I wanted to give voice to an unknown reality, to a drama that involves many people but of which there has never been a representation, neither literary nor cinematographic. It was a very painful journey that changed my relationship with writing. If in my previous novels the narrative structure was more important, in this work it is the language that is in the foreground. To tell the unspeakable and cross the intimacy of Luce and Pietro, I had to use a more attentive, refined, evocative language. Poetics.
Nobody knows about us is an inner journey, the title of which reflects the ineffability of certain sensations. It can refer to those children of whom no one knows and who have never opened their eyes to the world, but also to the pain that involves those who are faced with certain dramatic crossroads.

The book describes the differences in mourning between fathers and mothers with great accuracy and sensitivity: what message would you like to give to the couples who read you?

Pietro is a wonderful character, resolute but also fragile, attentive, balanced, sensitive. A man very much in love. He is the man that any woman would like to find herself next to in such a situation. The times and methods of mourning are necessarily different within the couple. Fathers are involved, but not as involved as mothers. It is also true, however, that there are more and less sensitive men. I believe that it is sensitivity that makes the difference, not so much being a man or a woman. In any case, the therapeutic interruption is like a storm capable of wiping out everything that a couple has built over the years. I believe that the destructive impact is almost inevitable. For this reason, just like the victims of a storm, you have to stand firm, hold on stronger than you would in the face of any crisis, if you want to stay united.

What is the path towards termination of pregnancy for a woman in Italy today?

If we talk about therapeutic or eugenic interruption, unfortunately there is a lot of ignorance on the subject. This is why when you find yourself in such a situation you don’t have the slightest idea what to do.

France is one of those countries where the limit for interruption is established based on the severity of the pathology affecting the fetus. Abroad in general there is a tendency to evaluate case by case. Setting purely temporal limits is very limiting, reductive, inevitably contradictory. Fortunately, diagnostic science is making great strides, and discovering late pathologies will be increasingly rare. What remains, however, for those who fall within the limits of Italian law, is a substantially inadequate and bigoted country, also capable of failing to provide adequate assistance due to prejudice. The irony of fate is that invasive investigations such as amniocentesis now concern an ever-increasing number of people, the state even pays it to those who have crossed the threshold of thirty-five, yet, faced with the ax of a devastating diagnosis, there is total paralysis, even on the part of doctors, who hardly advise the patient on what to do. Not to mention the shrinking number of non-conscientious objectors. But that’s another story.

What are the taboos that “Nobody knows about us” wants to break down?

If we want to define ourselves as a civilized country, we must at least have the courage to look at certain realities that, however uncomfortable, exist. Ignoring them doesn’t help make them disappear. We should be able to question ourselves more serenely about what can and cannot be done when dealing with delicate issues such as these. Having pointed a small spotlight where there was only the darkest darkness is a sad record for which “Nobody knows about us” unfortunately takes credit.

If you wish, you can also read this article written by one of our mothers on our blog.

If you are a parent, have faced or are facing this bereavement, you can consult our forum and participate in our self-help activities; if you are a parent suffering from a diagnosis of your child’s pathology, and you have decided to continue the pregnancy, you can receive the support of mothers who, like you, have followed this path.

CiaoLapo focuses on “what still can be done”, for you, for your family, to greet or remember your child, in full respect of every decision and conscious choice.

The CiaoLapo headquarters in Prato

The culture of silence #breakthesilence

Psychological intervention during hospitalization in the case of...

This site uses Akismet to reduce spam. Learn how your comment data is processed.

Perinatal bereavement is not postpartum depression, but it can become...

All in one box